The longleaf pine is an iconic tree in the southeast and has shaped our history. It’s relationship with fire and the many plants and animals make this ecosystem one of the most diverse in North America.

“There was something, I thought, very graceful in the millions upon millions of tall and slender columns, growing up in solitude, not crowded upon one another, but gradually appearing to come closer and closer, til they formed a compact mass, beyond which nothing was to be seen.” –Basil Hall, first southern explorers

Longleaf pines historically covered much of the southeast, from Virginia down the coast of Florida and all the way to eastern Texas. They were once one of the most extensive ecosystems in North America.  The decline of longleaf was attributed to the naval industry, tar industry, over-logging and fire suppression.  Today, only about 3% of the original range remain.

Just like the rainforest need rain, longleaf pines need fire. Their adaptations to fire are evident in their very morphology- thick bark, long pine needles, absence of low hanging branches.  These forests thrive from periodic burning. Fire has fostered a unique habitat in longleaf pine forests for many plants and animals, several that are only found in longleaf pine forests. In fact, this ecosystem is one of the most diverse ecosystems in North America.  More than 40 species have been documented in a single square meter- how amazing!  Land stewards today continue to conduct controlled burns in hopes of restoring lands back to longleaf pine forests.

Walking through a longleaf forest is a peaceful outing- the landscape is open and grassy with beautiful wildflowers and forbes around.  If you have not visited a longleaf forest, get out and explore! 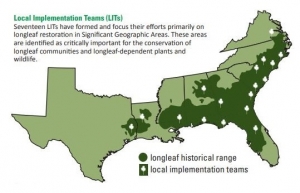 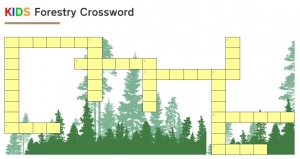 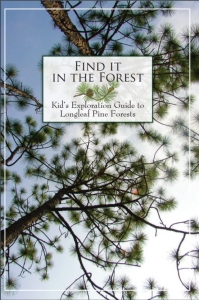 Mammals of Longleaf
Scroll to top